You Are Here: Lars M. Blank

Head of the Institute 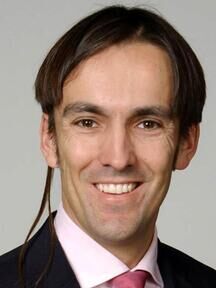 Lars M. Blank studied Chemical Engineering from 1990 to 1997 at the University of Dortmund (Germany) and Biology from 1992 to 1997 at the Ruhr-University of Bochum (Germany). During his master theses he worked in the field of Metabolic Engineering in the group of Prof. E. T. Papoutsakis at Northwestern University, IL, USA and in yeast cell biology in the group of Prof. W.-H. Kunau at the Ruhr-University of Bochum. In his Ph.D. in the group of Prof. L. K. Nielsen at the University of Queensland, Australia (1998 to 2002), he developed a continuous process for hyaluronic acid production using lactic acid bacteria. During his Ph.D. he worked as a visiting scientist at the Technical University of Denmark (DtU), Lyngby, Denmark (Sept. - Dec. 1999), reprogramming Lactococcus lactis from a purely anaerobe to a partially respiratory organism. As a postdoctoral fellow of the Deutsche Akademie der Naturforscher Leopoldina (Halle, Germany) he established flux analysis as an additional tool for yeast Systems Biology in the group of Prof. U. Sauer at the ETH Zurich, Switzerland. From November 2004 until June 2011 Lars M. Blank lead the group Systems Biotechnology at the Laboratory of Chemical Biotechnology of Prof. Andreas Schmid at the TU Dortmund and was a senior research fellow at the Leibniz-Institut für Analytische Wissenschaften - ISAS - e.V. in Dortmund. In January 2010 he finalized his Habilitation. On the 1st of July 2011 he became professor and head of the Institute of Applied Microbiology at the RWTH Aachen, Germany.

Lars M. Blank focuses in his research on fundamental and applied aspects of microbial metabolism. Of specific interest is the interaction between the metabolic network and the introduced genetic and environmental perturbations. The research on in silico/in vivo metabolic network operation is aimed at a deeper understanding of cell function, with the ultimate goal of rational cell engineering.

In his teaching, Lars M. Blank focuses on the integration of biological concepts with the tools from bioinformatics and engineering. He believes that a sound knowledge base in the life sciences is key for creative and thus successful work in the areas of Metabolic Engineering and Synthetic Biology.