You Are Here: METAFOR 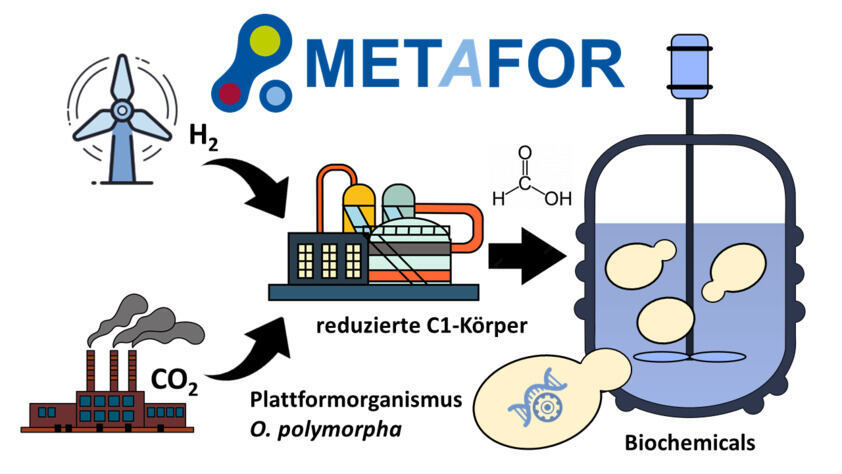 The utilization of carbon dioxide is an important factor for the bio-economy since CO2 as a substrate is not in competition with food production, can contribute to the reduction of the greenhouse effect in the environment and is available in almost unlimited quantities. Thus, carbon dioxide has got much attention as a substrate for biological production processes for several years now. Unfortunately, the use of microorganisms for CO2 fixation is associated with major challenges such as the lack of genetic accessibility of many CO2-assimilating microbes. In contrast to biological processes, a chemical conversion of CO2 to reduced C1-compounds such as methanol or formic acid is already established. Therefore, in the project METAFOR we use a hybrid approach consisting of a chemical reduction of CO2 to C1-compounds and subsequently a biotechnological conversion into industrially interesting products.

Both methanol and formic acid can be produced from CO2 by hydrogenation of hydrogen. Methanol is a commonly used carbon source for the methylotrophic yeast Ogataea polymorpha. In contrast to methanol, formic acid is less toxic to humans, non-volatile and does not form explosive mixtures with oxygen. Currently, O. polymorpha is mainly used for recombinant protein production. However, O. polymorpha has the potential to become an industrial platform organism, as this yeast is suitable for high cell density fermentation on inexpensive media and substrates and has a high temperature and pH tolerance.

In METAFOR we develop CRISPR/Cas9 based metabolic engineering strategies for O. polymorpha, which are then used to enable the assimilation of formic acid. For this purpose, we rely on native metabolic pathways of methylotrophic yeasts and synthetic metabolic pathways that are made accessible by enzyme engineering. Starting from the C1-compounds methanol and formic acid, O. polymorpha is finally modified to form industrially relevant products such as lactate, isobutanol, acetone or isoprene. At the end of METAFOR, the newly developed biological production process will be integrated into the chemical CO2 reduction process.