Metabolic engineering of Ustilago trichophora: an isotope-assisted metabolomics approach for the improvement of malate production from glycerol

Biodiesel is a fast-growing alternative to fossil energy and it has been applied to conventional diesel engines. From the report of the World Bioenergy Association, around 10.2 million tons of biodiesel (43% of the world biodiesel production) were produced in Europe in 2015. Germany is also reported as the country producing the third highest amount of biodiesel, right after the USA and Brazil. However, due to the production of glycerol as the main low-value by-product (10% w/v), the whole biodiesel industry is not yet economically competitive compared with petroleum-based processes. Thus, efficient approaches to convert crude glycerol into more desirable products are in urgent demand to improve the economical and ecological aspects of overall biodiesel refinery.

Recently, the fungal family Ustilaginaceae (> 600 species) has been shown to have potential for using non-food biomass or bio-industrial waste streams as substrate to produce chemicals of industrial interest, such as organic acids, glycolipids, and sugar alcohols. The ability of many Ustilaginaceae strains to grow in haploid and unicellular form is remarkably advantageous for industrial applications when compared to other established filamentous fungi where the control of fungal morphology is an important process determinant. From a screening of 76 Ustilaginaceae forthe ability to convert crude glycerol to organic acids, U. trichophora was found to have the highest natural production rate of malate. Further optimization on this strain increased the malate titre to over 200 gL-1 , which is the highest reported titre for microbial production so far. Notably, the yield was just approximately 31% of the theoretical maximum, indicating that there is still more room for further optimizations. If the malate production yield is improved, U. trichophora could be a novel candidate for the industrial production of malate by valorising crude glycerol.

The main obstacle for U. trichophora’s strain improvement is the lack of knowledge on its metabolic network. Even the highest malic acid titre was achieved by nothing but medium and fermentation optimization. Therefore, metabolomics with the assistance of isotopic compounds can be used to guide metabolic engineering strategies. As a bottom-up process focusing on high throughput identification and quantification of metabolites, isotope-assisted metabolomics approaches have been proven to be one of the most powerful methods for providing new insights into the structure and dynamics of metabolic network. Metabolic engineering for strain improvement can subsequently. be done by focusing on modifications of the host metabolic network to alter the metabolic flux distribution and maximize the production of target compounds. 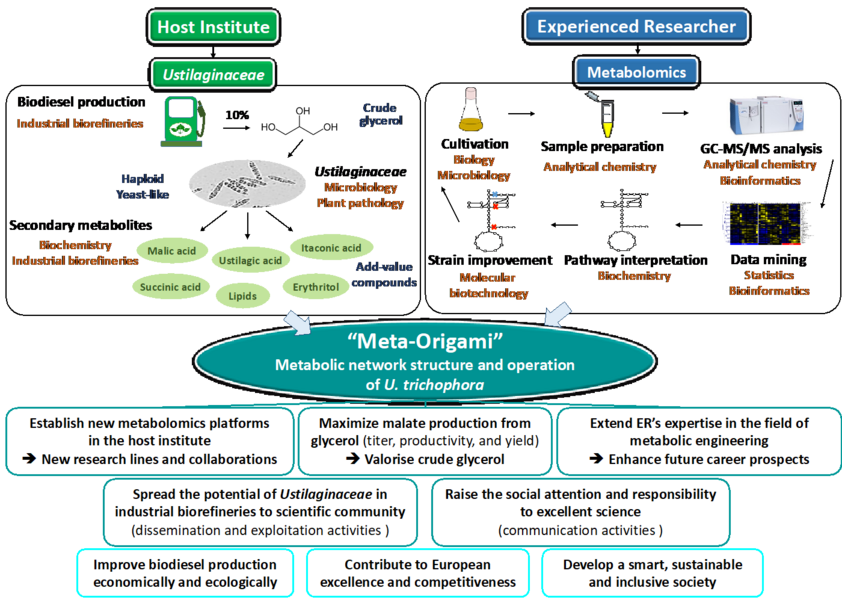 
The project “Meta-Origami”- an application of isotope-assisted metabolomics to explore the structure and operation of Ustilago trichophora metabolic network. “Meta-Origami” aims to decipher and reconstruct the metabolic network in U. trichophora to maximize performance with respect to titre, productivity, and, most importantly, the yield of malate from glycerol. This project will address the following specific objectives:

This project has received funding from the European Union’s Horizon 2020 research and innovation programme under the Marie Sklodowska-Curie grant agreement No. 793158.